Back to school for Luke, had a easy mellow morning with Lil. She seemed in a good space.

Went home and played a bit, the cleaning person comes today so it is always a game of trying to stay out of her way and stay out of the rooms she has not had a chance to clean. When you are living in approximately 300 square feet of space, it is not that easy to stay out of someones way! Then Lil was clearly ready for a nap, even the cleaning lady was saying “oh, you are ready for a nap!” so I put her down and she reacted differently that ever before. There is a fairly loud air purifier in the room, but still when a router came on in the construction zone, she just went cooky crying. I wet in and comforted her and thought it was interesting because I could barely hear the router and she has CERTAINLY slept through a LOT more noise in the last ten weeks, never the less, I put put her back down. Well, cut to about five tries later and each time I go in she is just standing there with arms outstretched to me to pick her up and that was the end of the nap. She had never exhibited this before, the arms outstretched, “where’s my love” pose, just needing to be held? I texted her Mom about it and feel it is probably a growing developmental thing, who knows? The truth is her nap may be coming to an end based on historical data anyway. 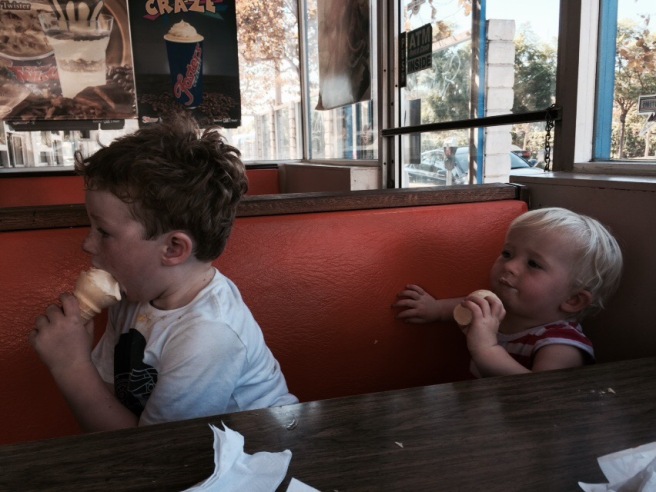 Followed by a trip to the Santa Monica Swim Center which Luke suggested and I fought internally. Blue Roof is across the street from the Swim Center, but we had to go home to get swimming supplies and come back, my first impulse is “what a drag, but the end of that story is that I thanked Luke for thinking of it, I really needed something like that the end my day, it was a wonderful romp in the pool.

Dinner was a real eye opener. We had basically the same thing we had yesterday. Roll ups (now called burritos because Luke asked if I could make them without the stuffing coming out the sides and I suggested that was a burrito. He was very skeptical at first, but now proudly tells his mom about the burrito!)